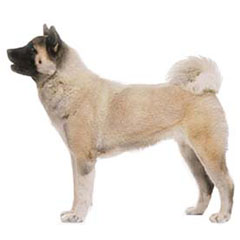 Replicas of the Akita's ancestors appear in carvings in the tombs of ancient Japanese people. Beloved on that island nation, the breed is named for the city of Akita, which is the capital of the Prefecture of Akita situated in the north of the main island of Honshu. These early prototypes of today's descendants have some of the spitz-type characteristics of northern Japanese dogs: large, square bodies; small, erect ears; luxurious double coats; and thick, heavy tails that curl up over the back. Early records date the start of the breed's development to the beginning of the seventeenth century. In 1931 the Japanese government, in an effort to prevent the loss of indigenous dogs to crossbreeding, declared seven Japanese breeds to be “national monuments” and national treasures of Japan. The Akita was one of the named breeds and has been a source of official pride ever since. Some refer to this esteemed hunter and defender of property as the national dog of Japan.

The well-bred Akita is intelligent, playful, and good company. These are highly territorial dogs and their owners must socialize them as young puppies with other dogs and other people. It is their tendency to attack strange dogs that wander into their territory. Without good breeding, socialization, and obedience training, Akitas tend to show signs of antisocial behavior. Of course, they relate to their families with affection and a sense of dutiful protection. They are very playful at home and tolerant of the rigorous play of their family's children. These large working dogs were originally bred to hunt ferocious prey animals such as bears and boars, and to defend their master's property. They are docile most of the time, good-natured, with courage, alertness and dignity. They are extremely loyal companions. However, Akitas are also stubborn, self-willed, and aloof when first introduced to strangers.

The first impression one gets when in the presence of an Akita is that of a self-assured dog, assertive, displaying muscular power with every motion. These are giant-size dogs weighing well over 110 pounds; 26 to 28 inches tall from the shoulders. Their heads are massive, triangular-shaped and flat on top with square jaws and no wrinkled skin. The neck is thick and muscular, as is the rest of the body, which is wide, deep and well-developed. Like most northern-type breeds, the Akita possesses a double coat that keeps them warm in very cold weather.

Males require a firm trainer. Females are somewhat easier to handle. Do not make the mistake of encouraging growling or other forms of antisocial behavior for the sake of protection. This could create a dangerously aggressive dog. Their territorial instincts are protection enough. The best watchdogs are the friendliest. In order to achieve successful training it is essential that you properly socialize this breed as young puppies, which means exposing them to many different people in a variety of environments. They should also be introduced to other dogs during puppyhood and thereafter. Obedience training these powerful, stubborn dogs must begin when they are puppies. The Down command will be easier to teach while the dog is young and not fully grown. The same is true for teaching Heel.You are sure to realize the potential of these intelligent, playful, yet protective dogs through early obedience training.

In warm weather, his short, thick double coat will shed continually, causing fur to fly across the floor of your home and get into everything as it wafts through the air. You can greatly reduce this inconvenient and annoying problem by shampooing the dog when necessary in a warm-water bath, and then thoroughly drying and brushing him. Start brushing him daily and trimming his nails once a week as a puppy so he will be accustomed to these procedures as he matures.

As in all breeds there is always the possibility of inherited medical problems. For the Akita, the problems may be hip dysplasia, elbow dysplasia, patellar luxation, vonWillebrand's disease (a serious blood ailment), bloat, and various skin conditions affecting the hair follicles. Most of these conditions can be avoided by acquiring a puppy from a reputable breeder with complete health records for several generations of his/her line of dogs.

Hellen Keller had Akitas; Hachi-Ko, who waited at the subway for his owner's return every day for nine years after his death.

© Copyright 2014 LifeLearn Inc. Used and/or modified with permission under license.

View All
We share the same goal – ensuring your animal companion is healthy and happy! Pet Health Library